My husband and I are made for each other. We’ve met 12 years ago (I feel old!) in a train (another story to come) and we’ve been together ever since.

We do have a lot of things in common and we both have similar passions, but we couldn’t be more different at the same time. I’ll better show you a few examples.

We both like the sea and would have a holiday at the seaside. We both don’t like sunbathing, so we have this in common.
Hubby would love a warm place, with a warm sea and he would swim and, after he would be bored of that, go for a scuba dive or something similar.
I would go for a swim in a pool and after that… for a walk on a beautiful place like South Stack Cliffs in Anglesey or Northern Scotland, Iceland or Antarctica (amazing landscapes, so beautiful, but a cruise there comes with a few thousand pounds price tag).

We both like trains (they have a special meaning, don’t they). While hubby is most impressed with the latest technology, I love steam power (not very eco-friendly, but so romantic). So, I would love an old train with a Flying Scotsman locomotive and hubby would rather choose Eurostar. If he would have to choose a steam train, he would go with Mallard 😛

We both like rooms and houses with a statement. We both don’t like a plain houses or the affordable range of new builds.
I prefer period houses (picture is from Attingham), with charm and character and beautiful embellishments, while hubby loves a modern house, a high end new build, with big windows. I would also love to live in a small cottage with exposed beams,  nice and cozy.

We both love nature and we like plants. While hubby loves the green ones and I do prefer the stronger colours. When I saw this 2 plants in Bodnant Garden I told hubby: this is us. 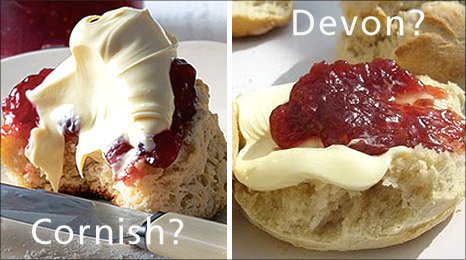 We both like scones, a thing we have in common. But, I like them with clotted cream, hubby likes them with whipped cream. After a few months or trying both ways to eat them, I like the Cornish style and hubby, obviously, prefers the Devon style.

And I could go on and on about things we both love and at the same time they are at the opposite ends of the spectrum. The best part is that we “have” to enjoy both sides 🙂